Yes, yes, I am severely behind in my blog writing. Again. Obviously, weekly or bi-weekly blog writing is not a strength of mine. Moving on, what’s been happening? Well, let me start with a little pre-Tasmania adventure  update. I’ll try my best to go in chronological order(ish) but because I want to cover a lot of ground and want to keep it short, I may (i.e., will) jump around a bit.

Before I left for Tassie, I decided that I needed to be properly outfitted. So I picked up a pair of Blundstones (which are a Tasmanian brand) and I was ready to face the wilderness. One thing you learn about Aussies is that they shorten most things (if not everything). Blundstones become blunnies and Tasmania becomes Tassie. You get it.

At the start of November, my salsa class had the graduation party for my level (1.5) in Southbank! It was heaps of fun. The goal, as set out at the start of the party (which I missed hearing by virtue of being late) was to dance with 15 new people. I have to admit this was a hard fail on my part. I definitely did not dance with 15 new people, but I’d say that I danced 5 or 6… so…. go me! Related to this but definitely a time jump, I decided to repeat weeks 3 and 4 of salsa level 1.5 at the end of November because these were the really tough steps to learn. I’m glad that I did because the foundation steps are… wait for it…the foundation to more advanced steps. After repeating the last two classes, I felt much more confident and comfortable with the steps. Unfortunately, it seemed that everyone had the same idea as me because the two classes I attended were jammed packed. I didn’t take any salsa classes in December because of my upcoming birthday and the Christmas holidays but I am excited to return in the New Year and see what salsa in January has to offer.

At the start of November I also attended my first ever spring races – a.k.a. Derby Day, pronounced DARBY Day in Australia. Derby Day is a themed day – black and white – so everyone dresses up in their black and white finery. I found the races interesting to say the least. I definitely got into the swing of thing in a black dress, pearls, and fascinator. Not going to lie, I kinda loved dressing up. To get into the races, you have to go under the Flemington Racecourse flowered arches and it kind of feels like you are in a movie. Our tickets were cheap, so we went out to sit on the lawns but it was sunny and fun and fantastic. I bet on one horse, Ocean’s 14, in one race. While he had a strong start, unfortunately he didn’t win. While I’m not into horse racing, it’s a milestone that most Aussies seem to do – so I’m glad I had the experience. 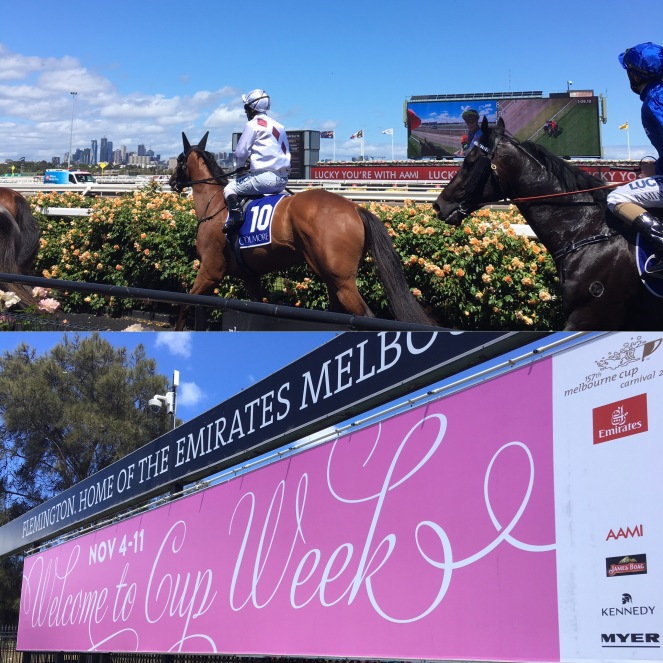 Going to see Harry Potter in Concert with the Melbourne Symphony Orchestra. I can’t even describe how good this was! The orchestra was playing all the music to the first Harry Potter movie, but the orchestra was so seamless and fantastic, I definitely forgot that they were even there. Every so often I would look down and it would be like, BAM!, Oh Yeah! There is an orchestra playing. 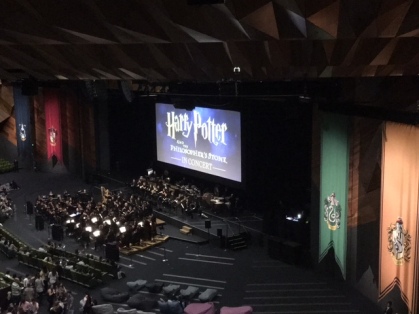 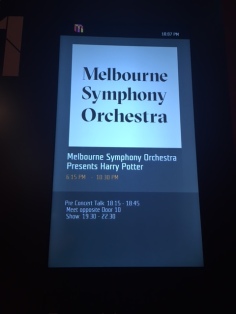 I also visited a Melbourne hallmark – Dejour Jeans in Brunswick. There is a line up to get in and there’s a line up to try on the jeans. Why? Because it’s Dejour Jeans. Obviously. While I think there is a more legitimate reason, I don’t know it. I didn’t leave with a pair of jeans, but I definitely will be back because I am sucked into the idea of having a pair before I leave Australia. 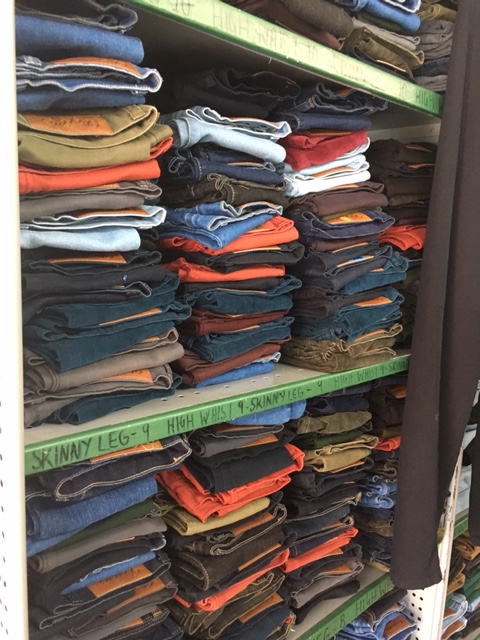 I also went to the Night Noodle Market, which was a noodle festival just near Flinders station. I’ve got to say, Melbourne and more broadly Australia has its lawn festival culture on point. So at the Night Noodle Market there are a bunch of stands where you can purchase almost any kind of noodles and some non-noodle things. It’s set up in a large park/riverside area. Once you have your food, everyone just chills on the lawn eating, chatting, and listening to music. It’s hard to put my finger on it but it’s just such an easy vibe. Love it!

I also assisted my ex-housemates in painting the backyard table. Did I mention that both of my ex-housemates are super artistic and fantastic? By assisting, I mean that I had minimal involvement, but it was still a great way to spend a Monday afternoon.

On a random day in late November, I checked out the Abbotsford Convent and Brighton Beach Bathing Houses. The Convent used to be a Convent and is now used a mixed art centre space. It’s a great place to check out and grab a bite to eat. There are three or four restaurants on the grounds. The Brighton Beach Bathing Houses are an iconic Australia image. They were cool to see but not an experience I would need to repeat. I have also since learned that they are insanely expensive. Like 1.5 million dollars. For a beach house. Which is tiny. Without running water. Or electricity. Gobsmacked!! That night, after a long day of sight seeing, my housemate hosted a Taco party that was great! 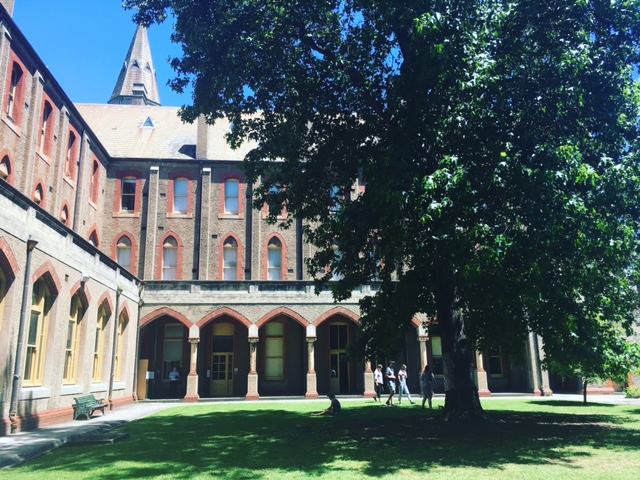 On another random day of sight seeing, I went to Alumentari for breakfast. I then went to the Shrine of Remembrance, followed by the botanical gardens. One thing about such a lovely warm climate like Australia is that all of the big cities have these amazing botanical gardens. If this was a thing I could transplant to Canada I totally would. Later, I checked out ACMI (the Australian Centre for Moving Image), Melbourne’s iconic graffiti alleys, I had lunch in a lane way and went to the DFO. I finished off the day at Smith & Daughters restaurant and a drink at Naked for Satan in Fitzroy. 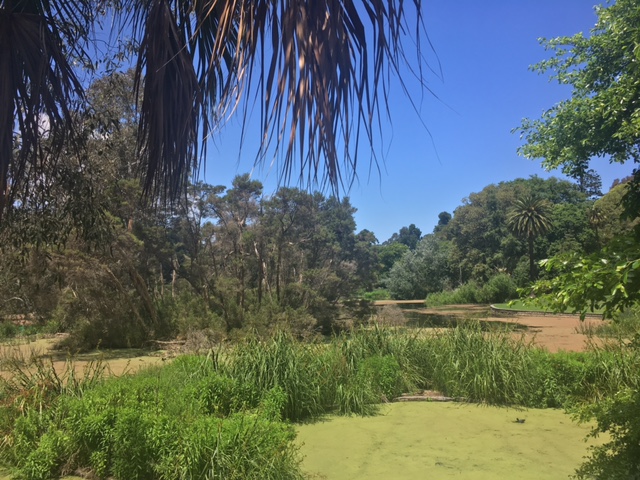 I’ve mentioned this before but Melbourne has so many good cafes. Like amazing. For instance, Code Black just off Sydney Road. In a perfect world, I would like to be a paid travel food blogger in Melbourne. Any ideas on how to make this happen would be appreciated.

In non-sight seeing news, at the end of November I moved houses! I have two amazing new housemates and a dogmate. I will definitely be sad when it’s time to move again.

Shortly after moving in, there was breaking news across Melbourne of an impending rain-apocalypse. People left work early for fear of flooding and the news anchors warned people to stay in doors. Taking their advice seriously, I decided to be prepared and dress for the weather. While there was some rain and even some heavy rain on the Saturday – I would not describe it as even close to a monsoon storm.

At some point at the start of December, I wrote about a million postcards. I use the term “million” loosely, but that’s how it felt. Also, postage is really really expensive. It’s basically the same price as the postcard. Come on – international postal system. Surely there is a better way. That said – I think there is something special about receiving international snail mail. It’s nice that someone put in the effort to write to you a letter. However, as I write this blog (almost a month after sending the postcards), I know that many of the postcards have not yet arrived which makes me a bit nervous. I’ll follow-up with the intended recipients in another month or so but if the postcards never arrive, it’s the thought that counts right?

As I mentioned above, Australia has all these amazing markets with such fun, vibrant, positive vibes. During the second week of December, I went to my local neighbourhood Coburg Night Market and had a great time. Great music, good fun, lots of knick-knacks to buy. So, to revise my statement above, if there were two aspects of Australian culture I could transplant back to Canada, it would be the markets and the botanic gardens. And yes, yes, before Canada yells at me, I know that there are markets in Toronto, but they just aren’t the same. As an entirely unhelpful suggestion, I suggest you come here and check them out and you’ll agree with me.